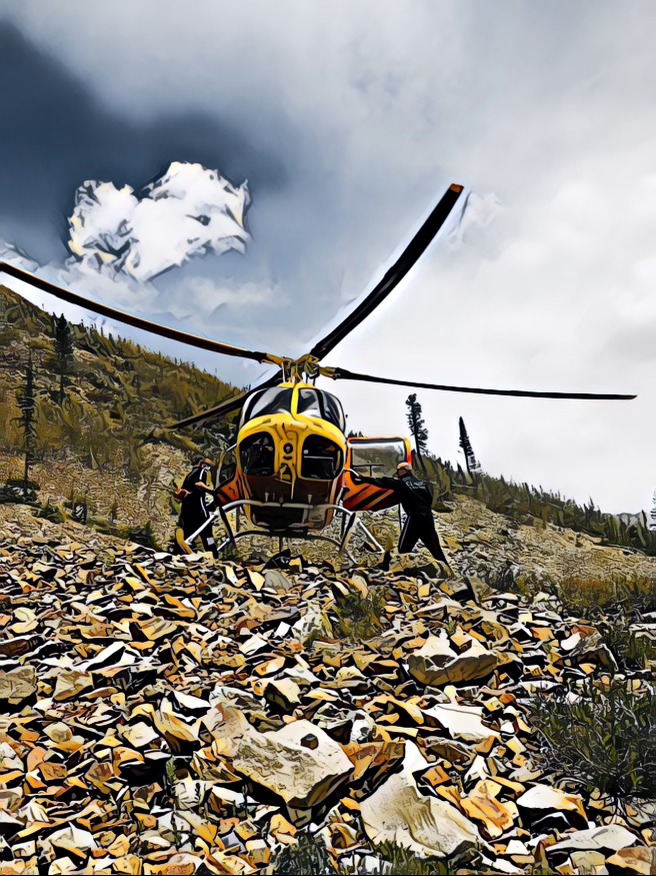 Tuesday, July 14, 2020 I was ambling down toward Navajo Lake at the back of my small family pack—two daughters and two grandsons, on our third annual hike in the Lizard Head Wilderness on the San Juan National Forest.

We’d just entered the edge of a large scree field–grand slopes of granite boulders, great and small, when my idle musing was broken by my daughter turning, urgently: “Dad, there are hikers here and they need an SOS. . . !”

It took me a moment—my firefighting and EMT days are decades past, but I stepped ahead to find a barely-standing, not-terribly-responsive young woman leaning against her boyfriend. A few quick questions settled the matter for me and I did what I never thought I’d really do: push the “SOS” button on my Garmin GPS unit.

Frankly, I was wondering if it would work—for years I’d carried a one-way ACR personal locator beacon just in case things went sideways. I’d had my satellite-communicating 66i for a year or so and fretted about relying solely on it because sometimes a text took several minutes to send. But just as frankly: it worked!

Within a few minutes, the Garmin emergency response coordination center responded. Another ten minutes or so, and they consulted with local SAR/EMS who ordered up air evac. With that news, a quick scout around showed no better place to wait—a scree field is a scree field—so we settled in to do what we could to assess and stabilize her. Once the evac was ordered, I started pecking additional information about patient status, medical history, and our location. One of the helo crew later said that really helped, and from my own experience I know it’s a huge blessing to not go in cold to a scene.

Two-way communication is the big advantage of InReach over my old ACR: I messaged my wife that I’d triggered the device for a third party and we were all OK. Garmin rescue center also called and told her that, so she wasn’t freaking out the whole time(!). Later I learned that the air evac was backed by a ground operation including an incident command set up at the trailhead, motorcyclists set to ride up to the wilderness boundary with people/equipment, and climbers staged in case the victim was in technical terrain.

The professionals really responded! I give my profound—absolutely heartfelt—thanks to the Garmin International Emergency Rescue Coordination Center; Classic Air Medical in Moab, UT; and Dolores County SAR: these folks are true professionals and incredibly committed to helping others. And they are the ones who really did what was needed to save her life.

Meanwhile, a steady decline in her responsiveness along with radically elevated heart rate fed my growing pessimism about her prospects. Simply put, she was tanking and I classified her as serious-to-critical condition. Yet her boyfriend held it together beautifully, and we were joined by helpful passerby who stopped to help (including a NPS park ranger/EMT).

Yet each moment simultaneously sagged and surged as we watched, waited; waited….waited…until that first glorious echo of a whirling, whopping rotor came to us. Far down the canyon; a small dot growing, taking form; then chopping over us and circling once, again, and thrice.

The rest was as routine as a medevac can be—happily, once the helo medics could see the ground we were on, they decided to try to pick her up from the scene, landing on a tiny patch of almost-flat scree about 30 feet away from us—an area the size of a queen bed or so.

That beats the heck out of carrying a limp body across broken ground: figure at least six people with relief every half mile or so if possible.

Helo popped up from its resting spot, and after a few tense moments while the pilot teetered and yawed a bit, pushing loose scree around until he had a firm spot to settle, we were treated to about 15 minutes of screeching jet intake, howling jet exhaust, and buffeting rotor wash while we finished packaging and got her loaded.

Note to all: if you have to work near a helo, stay focused and expect to be in a howling mini-hurricane where you can’t hear anyone very well and there is very high risk. Pay attention to the professional who is directing things, and while everyone wants the cool photo/video, put the bleeping phone away when its time to do business. Bystanders will share their photos. THIS IS HIGH RISK: Make every effort to have a safe spot to dive if the ship goes down: you simply cannot believe how much deadly chaos ensues when it hits the ground. Helos are just a tool, and you have to focus on what the people are doing and the actions they are taking.After some two hours passed, we scampered out of the way and the ship lifted off, with a live woman aboard. That, believe me, was a “moment.”

But there was another moment that made it for me. As the one medic buttoned up the doors, he paused to check that we were out of the way. I reflexively flipped a quick salute. And before my hand dropped, he snapped to perfect attention and rendered a beautifully precise hand salute.

In that moment I realized that when our lollygagging jaunt to the basin turned life or death—that weird moment when adrenaline surges and time explodes, slows, collapses, and runs frantically away from you—all the threads of the past came together to give this one woman a chance to have a future. All the prior years of experience, training, and personal decisions across each of our lifetimes was woven into this moment.

And from that moment, there would be a new thread—the life of a stranger—tracing on into the future. Having a hand in that leaves one with the most incredible feeling in the world. Believe me, as dramatic and exciting as it all sounds, you do not want a back-country emergency like this. But if it happens, and it turns out like this, it will change your life.

A few take-aways: Be prepared, i.e., have a satellite emergency device! Of the dozen or so hikers who passed the scene, we were the only ones with Garmins (both daughters carry minis). The doctors said that the air evac was crucial to her survival. And if a helo is looking for you, go overboard being obvious: I had texted that we had two orange jackets spread out, and waved one as it came in—but the guys later said they had a very hard time seeing them even in a broad grey scree field. Even if they have your coordinates, text them a cue, i.e. “on scree slope, NW side of lake outlet.” If you are close to where the helo is landing, secure all loose hats, jackets, blankets, lightweight gear, etc. beforehand. Imagine a 70 mph wind slamming into your location, and if that wind would move something, secure it. If there is time and you’re sure of where the helo is landing, try to clear at least a 50′ radius of light debris–the less stuff flying about, the better.

And remember–by the time you intervene, the emergency is in a sense, over. What’s happened has happened; all that remains is to evacuate the patient as swiftly and safely as possible to definitive care. And that will take time: the helo took about 40 minutes to get on scene and then about 20 to recon the area, figure out a plan, set down at a distance, and for the EMTs to find their way to me. Total elapsed time was about 2.5 hours, and in a wilderness area that is about as fast as it gets. Ground evac would have taken around 8-10 hours. Watching that helo lift off with a live patient put Mastercard moments to shame: it was priceless beyond words.

We hiked out of the wilderness the next day, dropping down from our campsite to where the trail forked–to the right, down to the trailhead; to the left, over to where the rescue occurred, a quarter mile or so. Nobody spoke for a few long minutes, but when one did, they said what we were all thinking: that woman just lived 24 hours that she would not have had but for a small miracle on a large mountain. It reminded us that each life is infinitely precious; that every one of us impact and alter the moment’s reality with every minute we live. And that is a blessing unspeakable and a hope incomprehensible.

Spend your next moment well.