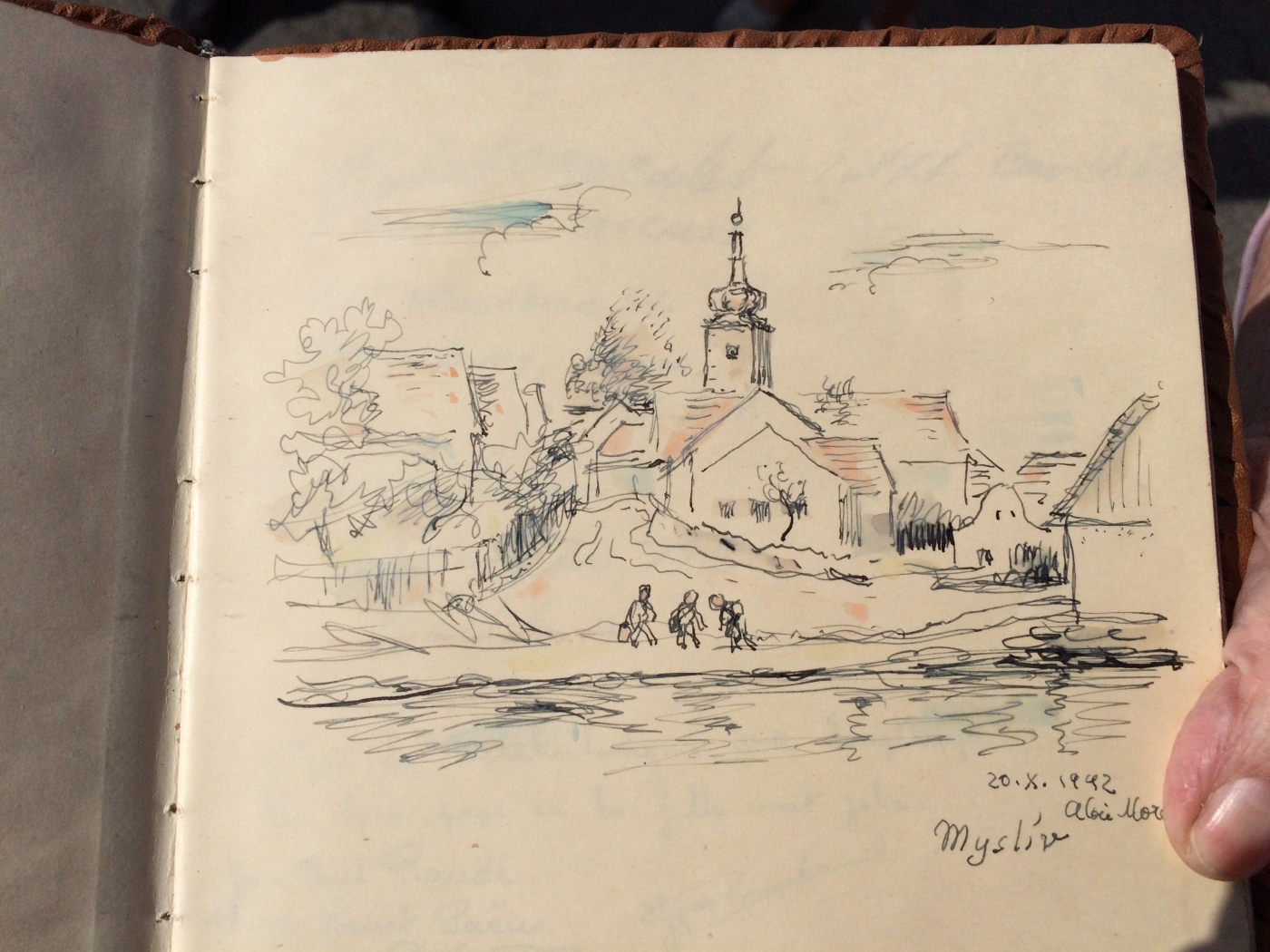 Southwest of Prague lies Pilsen, and southwest of Pilsen lies Western Bohemia, a fair and rolling land that blends into Bavaria across the German border. Agriculture and woodland, green upon green and splashed in spring with rolling fields of yellow as rapeseed-the canola oil plant-blossoms. Amid the fields, prim villages pop up in a bend of the road here and a hillside there. Quiet, thriving; very much in this modern age, yet medieval at the same time–town squares, chapels; ancient homes and winding cobblestone. 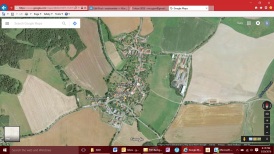 It seems a storybook land, and rightly so, for I found a story–my dad’s story–in one such village, the burg of Myslív.

For it was in Myslív where the war was won; Patton’s Ghosts of the 2d Cavalry (Mechanized) had fought across France, through Germany, and plunged deep into Czechoslovakia. Dad led C Troop, 42nd Squadron of the 2d Cav to the village of Myslív when word came to stop fighting.

But word alone was not enough–there’d been rumors galore and this was no time to stop until hostilities were ended for sure. Then the written orders came, and dad and his radioman clambered out of their M3 halftrack to stretch in the spring sun, and savor peace. Their mechanic snapped a photo….

Myslív was the last town C Troop liberated, and it was to Myslív that Gwenn and I went, 1 day shy of 71 years later, to accept on dad’s behalf honorary citizenship in the town.

The visit was a year in the making: it seems that the town promptly put on a dance for their liberators, and many of the C Troop soldiers signed the town chronicle afterwards. Somehow, those signatures recently came to light, and town officials began searching for their aging liberators, or at least surviving family  members. That search led to the 2d Cavalry Association, a private group of 2d Cav vets and current troopers, and that led to an email to me: 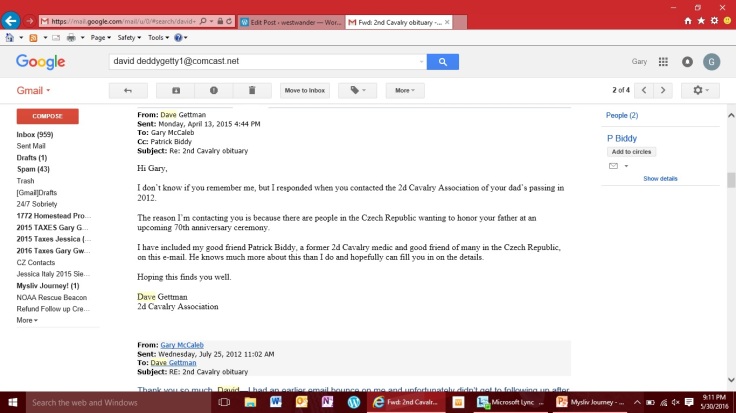 Attached to that email was evidence that something was afoot–dad’s signature, and his prayer for the people of Myslív: “May God grant us a long and lasting peace.”

So one thing led to another-or more specifically, all things in Western Bohemia seem to lead to one frenetically energetic and utterly engaging publisher and historian, Bob Balcar. Bob (below, right) became all things to us-escort, host, translator, guide, and very quickly, a friend.

Over the previous few days, Bob had facilitated our joining town leaders for liberation ceremonies in Asch, then spent a couple days guiding us through Western Bohemia as we traced the battle route of the 2d Cav from Germany and into then-Czechoslovakia. And he knew whereof he spoke, having written 12 of a planned 15 booklets on the American liberation of Western Czechoslovakia. When the topic of Myslív came up, Bob’s animation ramped up a bit, and he promised us “a surprise.”

So as we wended our way into Myslív, the “surprise” was immediately evident: the town square was full of Czech military re-enact0rs–guys who are dead serious about living history, and who devote untold hours to restoring, maintaining, displaying, and exercising the glorious machines that helped free the world. 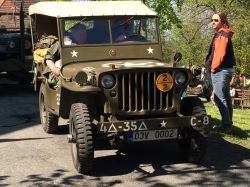 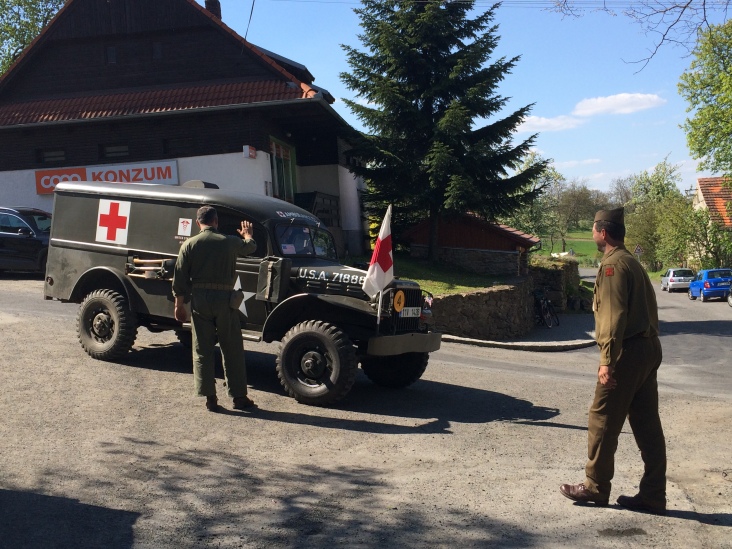 For a kid who grew up on Army bases, this was the best of surprises. Sun-warmed canvas smells just-so, and once discerned is never forgotten. Olive drab on real steel-yes!-you can make a modern car out of a single fender on these old rigs–there’s just something about seeing this gear that makes my heart sing. And it sang–what a perfect surprise, indeed!

As much as I wanted to clamber into each and every rig, there was another priority–two, in fact, which seem to be the two standard priorities in the Czech Republic: pork and beer. Into the town hall we went, joined by a delegation of troopers from the still-active 2d Cav stationed just over the German border in Vilseck.

And soon, the ceremony began…and as I learned, the surprises had only begun.

Of course, a greeting for us both and a glorious bouquet for Gwenn. The stage was set: Mayor Marie Pícková greeting us, joined by the town choir, fire department; Czech re-enactors; the 2d Cav troops, our translator, and of course, the village folk….

As with so many–if not all–of the villages in Western Bohemia, Myslív had a large plaque celebrating the American liberators–and in May, the month of liberation, these will be festooned with red, white, and blue flowers, garlands…and wreaths. 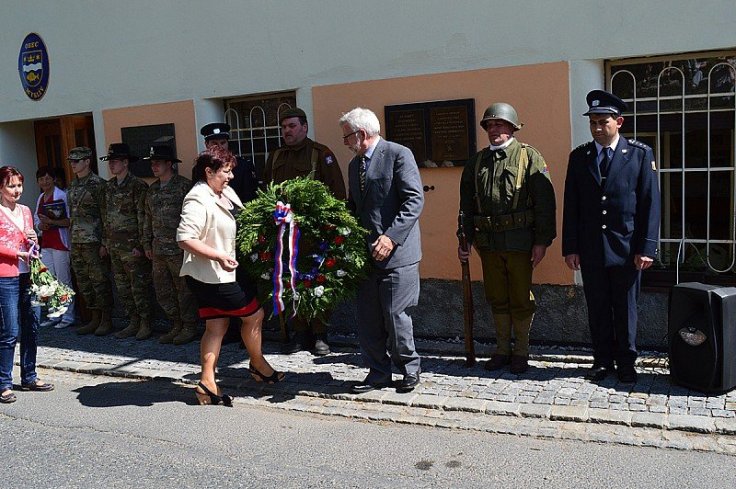 As Bob had promised in an early email, “festive speeches” ensued and it was piercingly clear that 71 years had not dimmed the gratitude of the citizens of Myslív for their liberation from the Nazi oppressors. 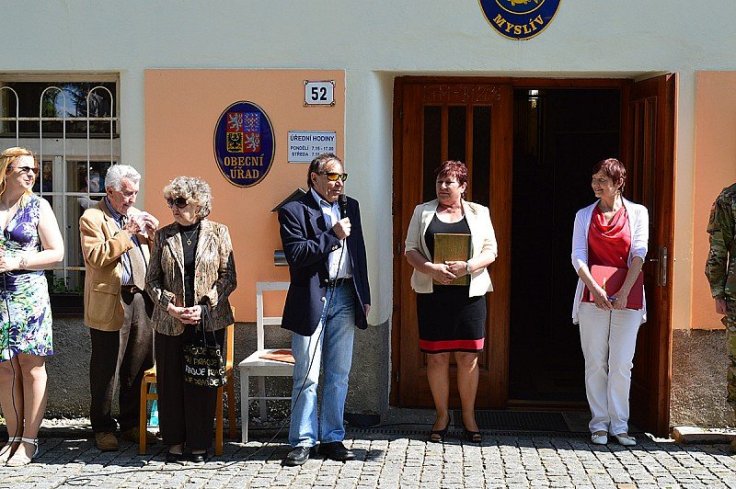 Between the songs, speeches, wreath-laying, and trying to follow the translator, I sort of lost track of events, only to discover an elderly, beaming, exquisitely turned out elderly woman approaching me, firm of step and eyes bright. 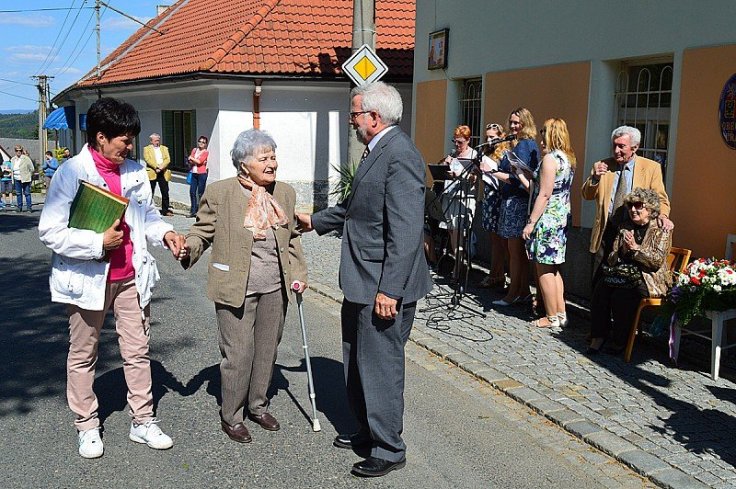 As she approached, I turned to Gwenn and whispered, “what do I do?” “Dance with her, she replied…. Thinking this to be a quaint custom in a quaint town, I reflexively asked, “why?”

What could I say to that? She would have been all of 14 years old or so; half her life spent under the Nazi terror; as the guns of May thundered ever closer, how the fear and hope must have tumbled through her young girl’s soul…. And then the grinding roar; clatter and clash of steel on cobblestone; the tanks, half tracks, jeeps, armored cars and men  sweep into town, commanded by a strapping small-town boy become cavalryman…and come the victory celebration, she danced with him…. 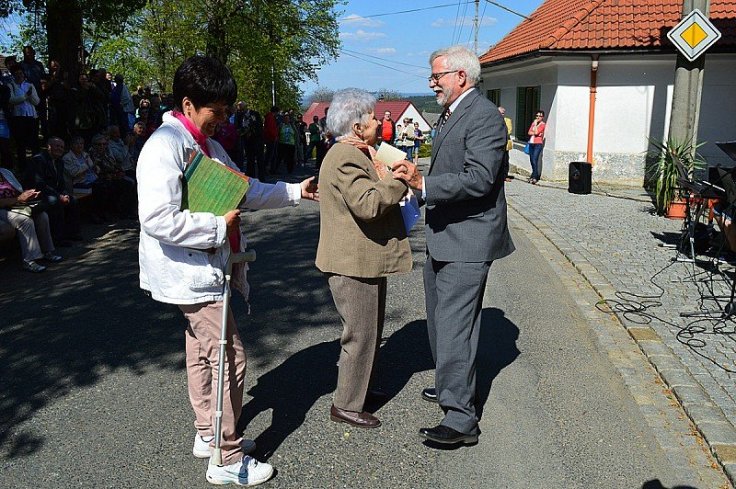 It’s only right to admit she danced better than I–and it is only truth that her eyes shown with a light and love and liberation that every human should be able to see, just once, in another’s eyes….

Within a matter of days, I had walked where dad fought; now I had danced with the girl with whom he danced in the fullness of victory–but the village of Myslív had not yet used up its surprises, for another woman approached, taller and a bit younger….

She clutched a small white purse, and with great care dug into it, emerging with an ancient leather-bound guest book….without a word, she opened the book: 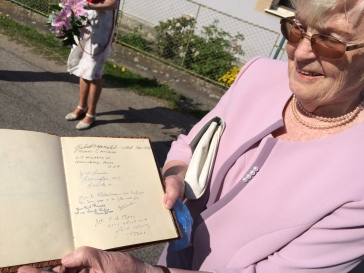 Again, I was graciously undone–once more my dad’s distinctive rolling scrawl through 71 years of misting time, and the story came out. Dad had been billeted several days in her family home, and after the ceremonies we went down to the very house….

Dad had slept in the room to the right in those fateful days of May, 1945. And I’m not sure just how much he communicated with the family, but I did have to wonder a bit when her son-in-law gave us a lift down to the house in his Jeep SUV…just how had dad managed to influence politics in the Czech Republic some 71 years later in such a brief visit?

Well, perhaps I’ll figure that out on our next visit to Myslív.

But in this visit, I learned something; something about evil, and freedom, and the heart and soul of a people who kept alive the memories of liberation through 45 years of Soviet domination and Communist lies. For once the Iron Curtain slammed down, only one “truth” was permitted–that the Soviets liberated the new people’s republic of Czechoslovakia…. Had someone seen black troops liberate a village? Why, those were Soviet troops in camouflage….  Other troops seen in American uniforms? Why, of course they were Soviet soldiers who had donned American apparel to confuse the Germans.

I can only guess at what went through the hearts and minds of generations of Czechs who had survived six brutal Nazi years, only to suffer 45 years more under an equally evil regime. Yet they kept the memory alive; their gratitude only grew in suppression–so that when 1989 came, memorials to the great American Armada and its General Patton appeared throughout the west of the land. When Pilsen–a city of perhaps 200,000–could again mention the American liberators, one million celebrants flooded the city square.

Never have I seen such gratitude for American sacrifice–such a passion for liberty–and such courage to pursue freedom and truth no matter the evil arrayed against a people.

Myslív may not be a great city,

But it is a mighty village,

and its people are a great people, indeed.

Thank you, to all of you in Myslív and throughout the wondrous Czech Republic.

And may God Grant us a long and lasting peace….

4 thoughts on “Mission to Myslív”